Does A Personal Trainer Really Work? I Engage One To Find Out.

Singaporeans are extremely knowledgeable, being up to date on any given trend – be it the latest gadgets and gizmos, personal finance or even fitness and nutrition.

There’s a dizzying array of workouts and fitness regimes you can participate in at the gym these days other than just plain old weightlifting. Yoga, Crossfit, Calisthenics – the list goes on and on. However, what stands out the most would be commercial gyms increasingly touting a personal trainer service alongside their usual facilities and equipment.

Some bundle it with a gym membership, encouraging people to continue utilising the gym’s facilities after their engagement with the personal trainer is over, like Gymmboxx. Others offer personal trainers of varying experience levels and flexible package deals, like Fitness First.

These commercial gyms claim that engaging a personal trainer will help you attain your fitness goals faster and even set new limits for yourself in the process. I for one, am hardly the most active of individuals, as my ballooning waistline and premium Netflix subscription will attest to.

Gone are the days where I could easily attain a Silver award for my annual IPPT (Individual Physical Proficiency Test). However, with my current test deadline fast approaching, the allure of an easy $300 – and curiosity to discover whether engaging a personal trainer is really the magic pill that it’s progressively starting to sound like – is motivation enough to get whipped into shape, at least for a month. 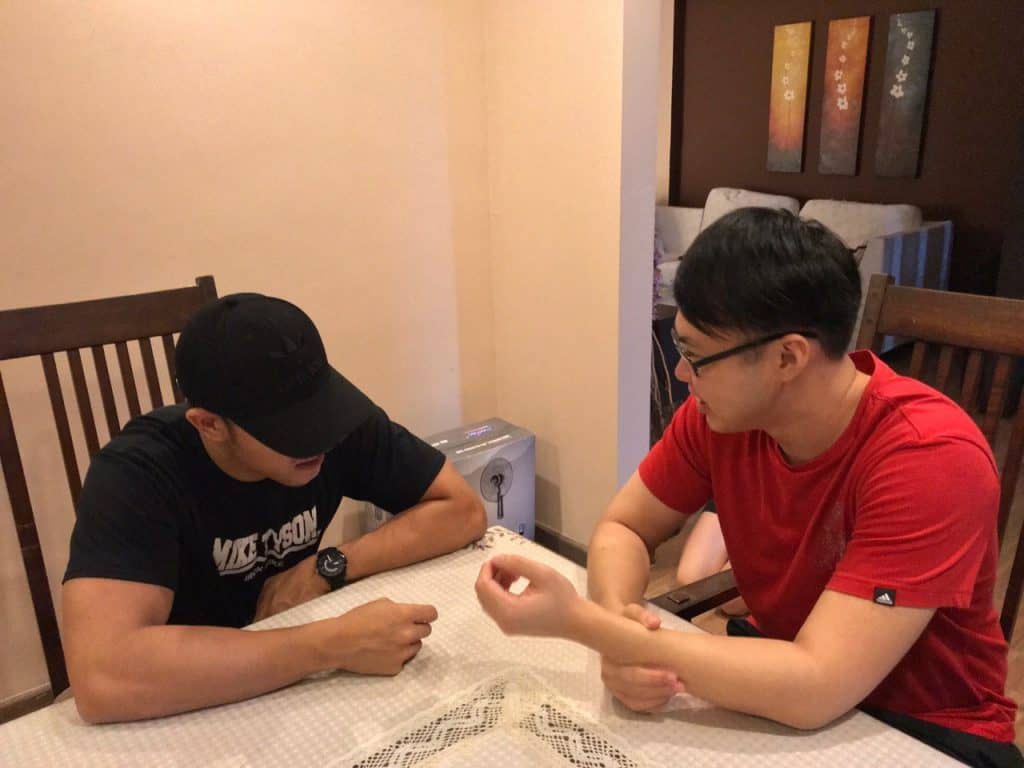 After asking around and more than a few chuckles from my friends, I eventually found and engaged independent personal trainer Zhuo Jiangnan.

The 24-year-old has a body that will put most young adults to shame, with quadriceps that can easily crush a watermelon. To say that I was intimidated would be an understatement.

Fortunately, his humour and wit quickly eased the tension, joking that he was just a personal trainer and far from a miracle worker upon being told that I had only a month to get the Silver award for my upcoming IPPT. 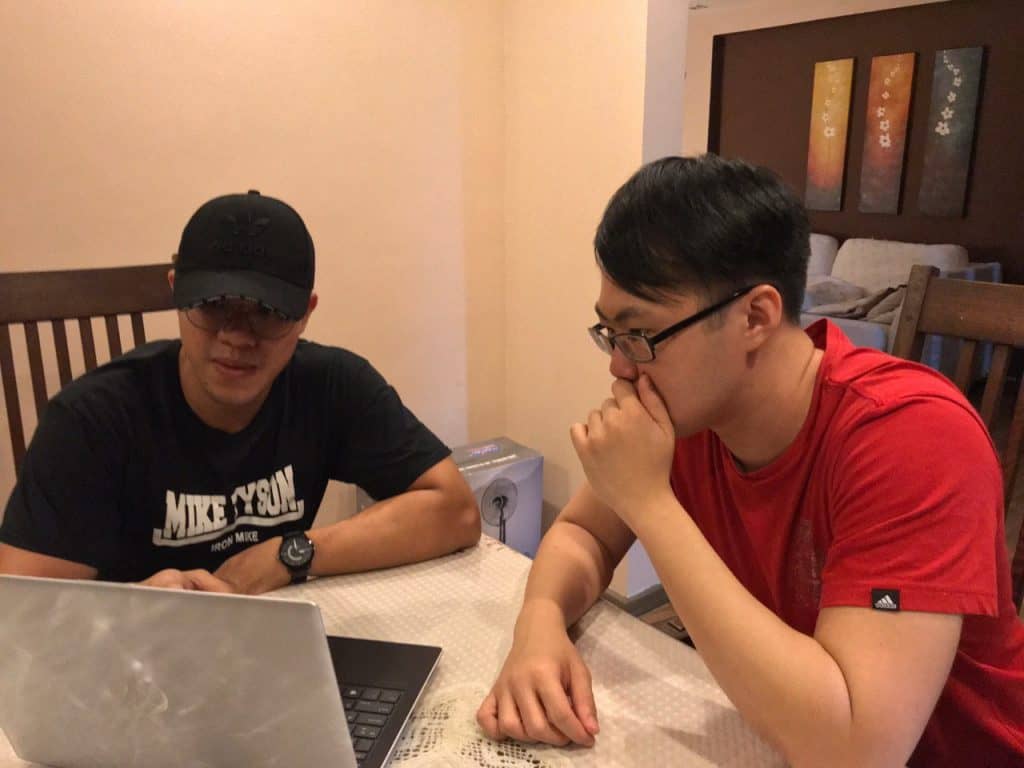 The initial consultation session was highly structured and detailed, encompassing other easily-neglected factors like diet and rest.

“Based on the clients I’ve trained so far and from my own friends’ experiences, the 2.4 km run would be the biggest hurdle for you. I’ll draft up a workout plan that revolves around HIIT (High Intensity Interval Training), using Tabata specifically”, Jiangnan said.

He was spot on – the last I’ve ran since finishing NS would only be to catch the bus, and even then I would fail on more occasions than I am willing to admit.

Diet-wise, he admitted that there was little that could be changed to drastically improve my fitness levels but did provide a general guideline. Additional protein and carbohydrates would be vital for quicker recovery and as energy during the workouts. I also had to cut out added sugar and salt among other things, so I had to say goodbye to my friends Lay’s and Cadbury for now.

Jiangnan implemented a one to two-day rest period in between training sessions. This works out to around three to four sessions per week, perfectly manageable considering it was my university’s winter break. With the training plan ironed out, now comes the part where I actually have to exercise and hopefully, earn a cool $300 by the end of the month. 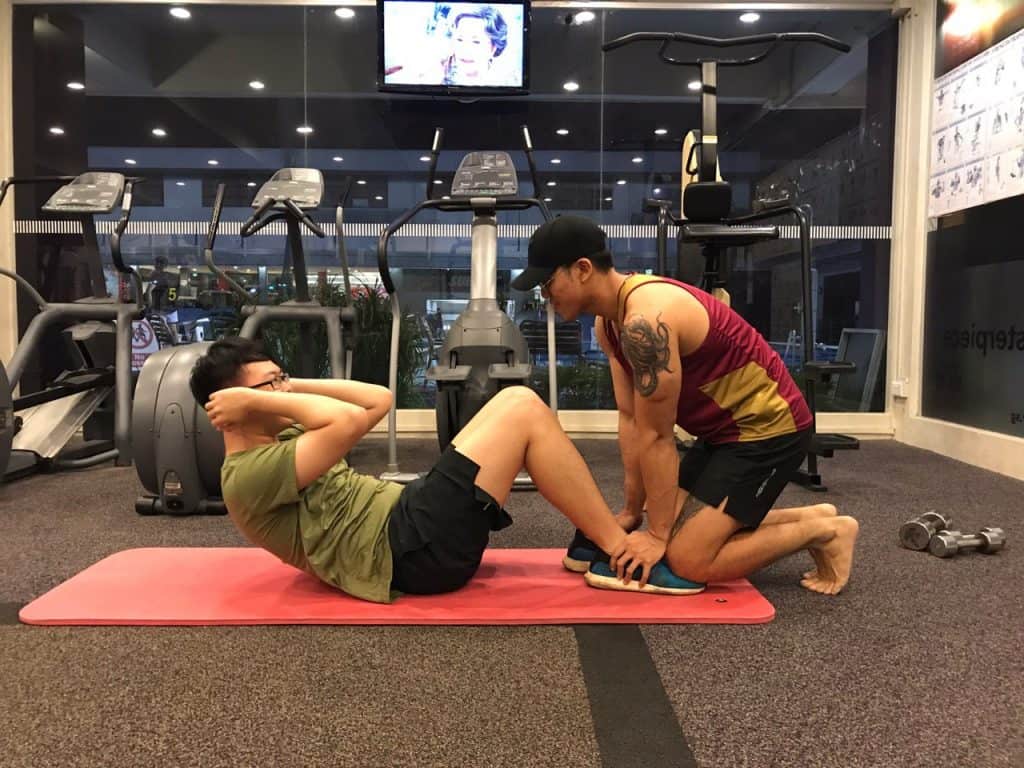 Fortunately, the training sessions were held at my convenience, taking away any potential excuses I would have had about ‘not feeling well’. Before each training session, Jiangnan would go over the plan for the day, week and coming week.

I was always under the impression that there was no formal qualification required for personal trainers and that the commercial gyms would be the ones training their employees.

He says that the two most popular certificates are from ACE (American Council on Exercise) and NCSF (National Council on Strength and Fitness). Jiangnan has certificates from both organisations. Sadly, the time for idle chit-chat was over and it was time to hit the gym. The exercises were reminiscent of the ones I experienced during national service, bar any extraneous ones like jumping jacks.

At the rate I was huffing and puffing throughout the first couple of sessions, I felt like a recruit again. Then there was even worse news. I was made to perform a mock IPPT at the end of the week to assess my progress – or lack thereof – and determine which areas to focus on for the next few training sessions.

Needless to say, I did not perform well, with my 2.4km needing much more work than the other two stations. A fifteen-minute run and an overall score of 43 points would not cut it under any circumstance. Although I wasn’t curled up on the ground crying yet, I was promised that the intensity would ramp up now that my base fitness level and threshold were established. 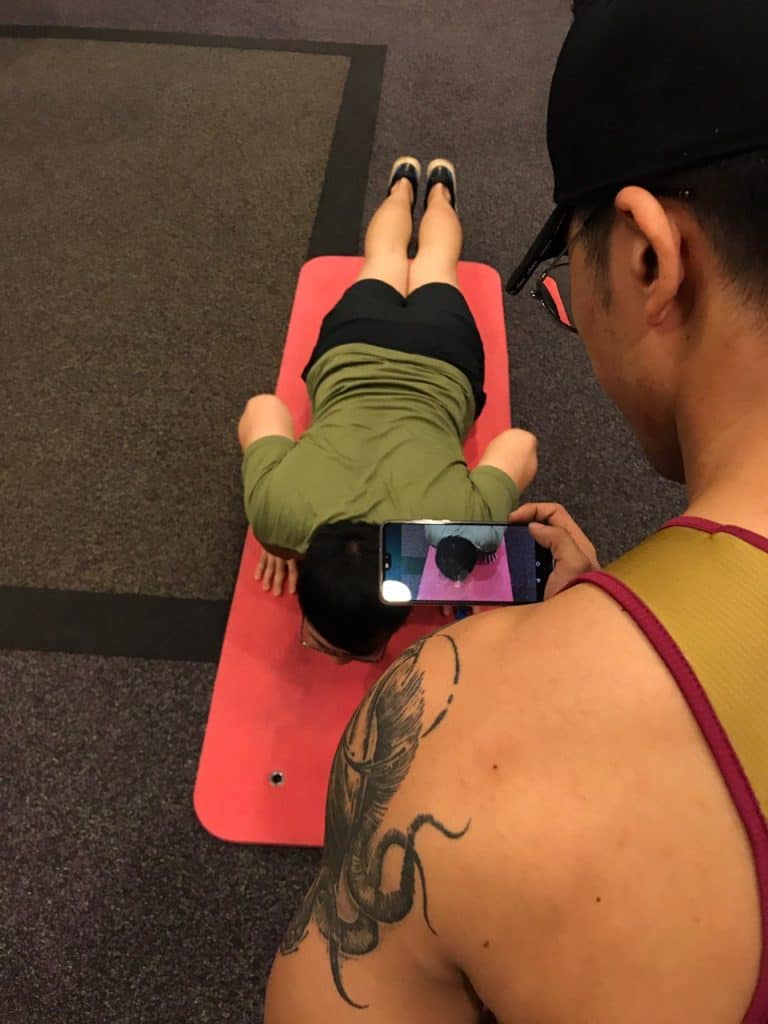 Jiangnan was not joking when he said that the intensity of the exercises would ramp up.

The exercises were idiot-proof as established during the initial consultation but keeping up with them this week proved to be even tougher than the first week. Fortunately, a potent mix of Jiangnan’s perfect drill sergeant impersonation and my own fear and adrenaline resulted in progress I could both see and feel.

The shuttle run-esque sprints did not leave my legs wobbling like Jello as quickly and I felt less resistance from my own weight when performing push-ups and sit-ups. One could say that it was muscle memory doing the heavy lifting and not Jiangnan’s targeted training plan as these exercises were burned into me for a good two years as an NSF.

On the other hand, I believed that such a specific regime warranted merit, rather than just mindlessly performing push-ups and sit-ups at home. It wasn’t as boring as I initially imagined it to be as well, with pointers given constantly throughout the workout and with the timing being shortened with each session, preventing the body from becoming used to the pace.

“I didn’t realise when I was going overboard when I first started out as a personal trainer. I would inject my own personality and goals into my clients”, Jiangnan confessed. It was through several mishaps that he realised each client was different, whether it’s their reason for wanting to work out in the first place or what method motivates them better.

One thing Jiangnan mentioned earlier was that a personal trainer’s client was not the only one learning and growing. He felt that his clients have helped him out immensely, shaping his training plans for future trainees and better methods for motivation.

They were not static figures in the process and it came into play during this penultimate week of training. Frustration was building quickly, with little progress seen; aches and fatigue rearing their ugly heads sooner than usual. The test was two weeks away and I was far from the 75 points required for a Silver award.

It felt like my effort was going down the drain.  I confronted Jiangnan regarding this problem and he said:

“This is a long-term process and hiring a personal trainer is not a magic bullet. You have to learn to listen to your body first – at the end of the day, my advice is secondary. It’s something that a lot of people tend to forget, not just you.”

Listen to my body I did, taking a longer rest period and lowering the workload for the second training session.

Although I did not feel like I would be competing with Usain Bolt anytime soon when those tweaks were implemented, I did experience less muscle soreness and fatigue overall. However, the most important takeaway was gaining a positive outlook after that discussion with Jiangnan. I learned that there would be crests and troughs when working out, not constant progress like you would see in shows or video games. 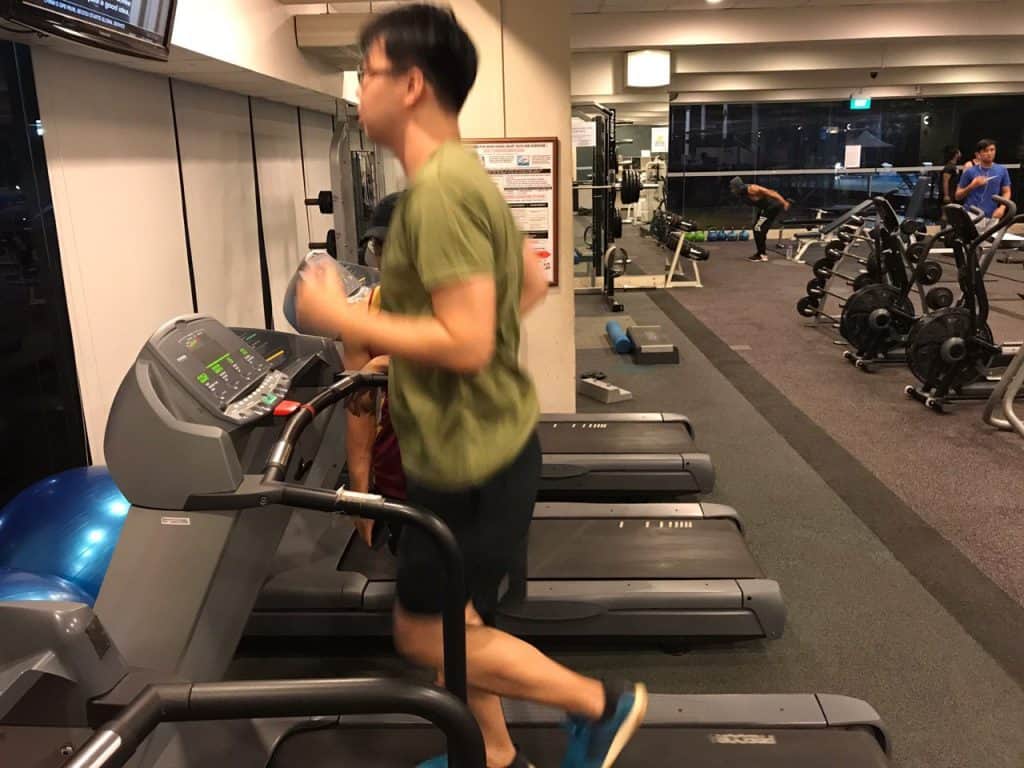 The fourth week of training was much like the first three, but I was buoyed by the fact that this was the final week of training along with the track being occupied whenever we needed it. The only exception was that I would be performing a mock IPPT test again at the end of the week to assess my progress.

If I’m sounding like a broken record by this point and that the exercises seem like something that anyone can perform at home after a quick search on Google, you’re not wrong. When I mentioned this to Jiangnan, he wholeheartedly agreed.

However, he did go on to add: “Once you use Google, all the information in the physical fitness field is available to you, but hiring a personal trainer is like having a mentor around regularly. Not a lot of people have the discipline and drive to make fitness a lifestyle, but it’s normal”.

It was a great point raised and throughout the month, I did feel that additional kick up my rear to make the best out of each session. Part of it was due to my IPPT’s deadline looming but another reason was the progress that’s felt after each week, be it working on improving my performance or minute details like my form for push-ups, sit-ups and when running.

After a grueling month of training and with my newfound knowledge regarding basic nutrition, I believed that I was more than well-equipped for IPPT. My old army camp’s fitness and conditioning centre looked strangely inviting, not to mention that the IPPT sessions for NSMen were held in the evening rather than under the burning hot sun that I was used to back when pixelated green was the de facto OOTD.

Push-ups didn’t seem so daunting and before long, the run was over. The training program’s effectiveness was definitely felt. It was a far cry from the mock test I performed a month back and the entire process did not feel as tiring.

Long story short, I scored a respectable 71 points and although it wasn’t the Silver award I was training for, I still got $200 for passing and a great story out of this experience. On hindsight, I believe I would still have passed and attained the same $200 even without hiring a personal trainer but my overall score would have been much lower.

Motivation would be low during the month and training for the test would have been highly inefficient, if I even bothered to. A personal trainer really was the mentor I needed to get back in shape, at least partially. This proved that at least in my limited experience, a personal trainer service wasn’t snake oil or even prohibitively expensive as people might think it is.

Also, I might just be a little more motivated to stick with that training regime I used for the month and even eat a little better.

The post Does A Personal Trainer Really Work? I Engage One To Find Out. appeared first on YP SG.